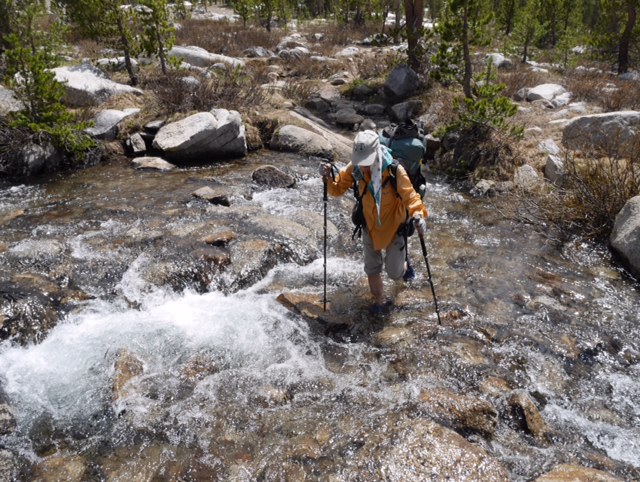 Today’s Sierra pass was 12,100 foot Pinchot Pass and last nights campsite set us up poorly for this pass today. We were camped 5.6 miles south of Pinchot but 3,000 feet below it, so it was a bit more of a climb than ideal. This combined with an unusual phenomenon that Pinchot had more snow south of the pass than to the north made it difficult hiking. Ideally we should have been closer and higher. But we made it over the pass and everything worked out OK.

This time of year snow in the Sierra freezes hard overnight and then softens as it’s warmed by the sun during the day. By mid-day the snow can get pretty soft and you will often sink knee deep or more into the soft snow making walking very difficult. If you start early on the hard snow you can make pretty good time.

This part of the Sierra has 12,000 foot passes every 12 or 15 miles. We try and position ourselves to be only a few miles below a pass in the morning. Our mileage is low because we don’t want to cross two passes a day since the second pass would be on soft afternoon snow (not to mention it’s a bit of work to climb 3,000 – 4,000 feet up each pass).

South and west faces of mountains usually have less snow because they receive more sunlight. Since we are hiking from south to north this usually means the south side of the passes that we ascend will have less snow than the north side that we descend.