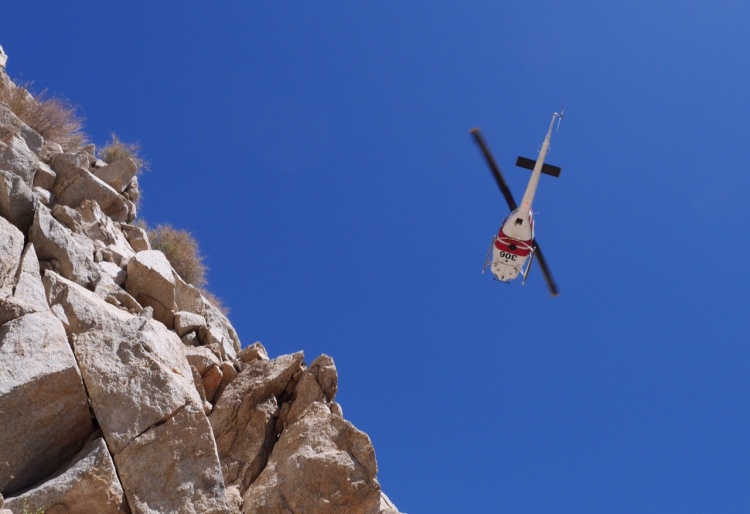 Deep Creek is a remarkably beautiful section of the Pacific Crest Trail and we spent the morning marveling at the views as we strolled toward the hot springs.

We arrived at the hot springs late in the morning and had a wonderful soak before continuing down the trail.

Shortly after lunch we encountered a thru-hiker named Chris running down the trail yelling about an unconscious man up ahead. Cell phones are not working in the canyon, so I quicken my pace as I headed toward the unconscious man to send an InReach message for help. Chris continues south down the PCT looking for help at the hot springs.

I end up running as fast as I could with my full pack about a mile and a half north on the PCT before finding day hiker Darrell laying beside the trail with Emma shading him from the sun using Chris’s Ridge Rest sleeping pad.

Fortunately Darrell has regained consciousness. Turns out a bee had stung him on the neck, he had some kind of seizure, and was unconsous for about half an hour. Darrell was insisting he was OK but the group consensus was to send an SOS InReach message, especially since Chris was off finding a way to call 911.

This was the first time I have used the InReach for an SOS and it worked pretty well considering the steep canyon we were in. I explained the situation by text message and responded to a couple of texts asking for more information.

After an hour or so Darrell decided he wanted to walk out so I let the SAR folks know and Deb and I walked with them down the PCT.

A helicopter showed up, but we were moving pretty well and it would have been difficult for them to drop someone down to us in the canyon.

Darrell was unsteady at first but made it three miles to the Mojave River Dam spillway, where a firetruck and ambulance met us.

Chris had left his pack and all his gear where Darrell became ill, so we carried that down the PCT a bit until some of Chris’s friends came back looking for him. We passed off Chris’s gear to his friends and they headed south toward the hot springs looking for him. We hope Chris is reunited with his gear soon.

I had not realized during the excitement that Deb had given all her water to Darrell and Emma, so she was pretty thirsty when we reached the creek below the dam. A few minutes later we ran into Coppertone, a 2006 hiker, who served up root beer floats at Highway 173. They were delicious. Deb was in disbelief at such timely Trail magic.